Mike is a TrackMaster (Revolution) Greatest Moments pack in the Sodor's Legend of the Lost Treasure series.

Featured in the Thomas & Friends DVD, Sodor's Legend of the Lost Treasure, Mike is a unique red engine that comes with his own tender and cargo car. Flip the switch to see him race along on another exciting journey! 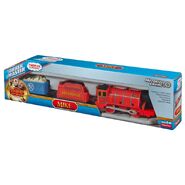 TrackMaster (Revolution) Mike box
Add a photo to this gallery
Retrieved from "https://thomastrackmaster.fandom.com/wiki/Mike_(Greatest_Moments)?oldid=51345"
Community content is available under CC-BY-SA unless otherwise noted.